This is located at the south east corner of the churchyard. Built in 1965 and restored in 1993, it consists of a battlescene carved in granite within a concrete plinth. The main panel shows the two armed hosts facing each other, the one about to claim victory, the other already accepting defeat, under the sign in the sky of the St Andrew’s Cross.

The inscription on the Memorial is as follows:

TRADITION SAYS THAT NEAR THIS PLACE IN TIMES REMOTE PICTISH AND SCOTTISH WARRIORS ABOUT TO DEFEAT AN ARMY OF NORTHUMBRIANS, SAW AGAINST A BLUE SKY A GREAT WHITE CROSS LIKE SAINT ANDREW’S, AND IN ITS IMAGE MADE A BANNER WHICH BECAME THE FLAG OF SCOTLAND.

Attached to the Memorial is a tall flagpole on which a Saltire is flown permanently, even during the hours of darkness when it is floodlit, as a reminder of the Flag’s origin. 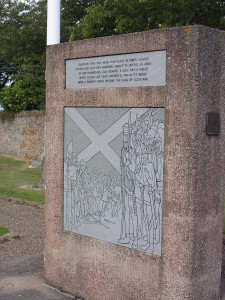