Please note that the Flag Heritage Centre is currently closed for restoration work and will open on 11 June 2022.

The Flag Heritage Centre is open from 9 am – 6 pm from April until the end of October.
The memorial and graveyard are open all year round. 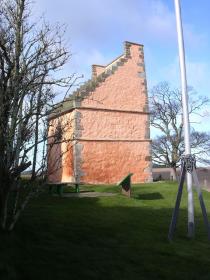 The Heritage Centre occupies a lectern doocot, located to the north of the Church, which was built in 1583 by George Hepburn, and restored in 1996. Within the enclosed atmosphere of the doocot, visitors can enjoy a short audio-visual dramatisation of the 9th-century battle above which the St Andrew’s Cross first appeared in the sky. Adjacent to the doocot is a viewing point with an interpretative panel, and there are spectacular views northwards towards the battle site.

Doocots, introduced to these islands by the Normans, were once common in Scotland, but are now rapidly disappearing from the rural scene. Pigeons were a highly desirable addition to the winter diet at a time when fresh meat was not available. The doocot filled the role of today’s deep-freeze! The birds had many advantages – they were prolific, they needed little space, and they foraged for their own food. It was the turnip which rendered the doocot a thing of the past. The introduction of this root-crop made it possible for the farmer to winter his beasts. Pigeons gradually disappeared from the menu, and doocots fell into disuse. 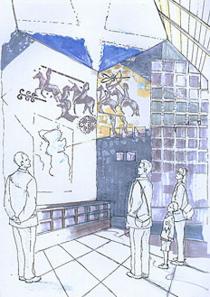 The Athelstaneford doocot is one of the earliest surviving Scottish examples from the 16th century. Intriguingly, the son of the builder George Hepburn, Sir John Hepburn, was the founder and first colonel of the Royal Scots. This famous Scottish regiment, the First of Foot, has used the Saltire as its emblem since the 17th century. The arms of the Hepburn family can be seen on the door lintel of the doocot.