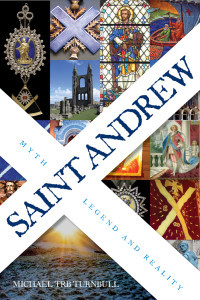 Saint Andrew and the Saltire have contributed much to the culture and identity of Scotland over the centuries. As early expressions of commercial and intellectual dynamism, communication and diplomatic skills they encouraged Scots to seek and develop closer ties with Europe. Not only are the Saint and the Saltire venerated mechanisms of reconciliation for the diverse strands of Scottish society, the author argues that they also offer a potent opportunity for commercial expansion in the future.

This book brings the story of the country’s Patron Saint bang-up-to-date and incorporates many of the opinions of Scotland’s most influential people as well as worldwide reports from the many Scots who celebrate Saint Andrew’s Day on 30th November.

A reissue of the St Andrews Press edition of 1997, fully updated and revised. An essential primer on Scotland’s Patron Saint for all Scots.