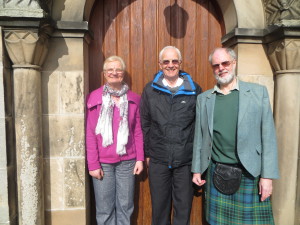 The Scottish Flag Trustees at Athelstaneford – birthplace of Scotland’s flag – met in the village Church on 15 March to discuss preparations for the 2014 visitor season which starts on Tuesday 1 April.

There was a particularly warm welcome at the meeting for new Trustee, Michael Turnbull, and for new office bearers Emily Armatage and Kenneth Stewart.

Michael Turnbull, who lives at Longniddry, is a prolific writer mainly on Scottish history, with 22 books published to date. He is currently revising his book Saint Andrew: Scotland’s Myth and Identity, and the new edition will be published later this year. With this historical grounding, Michael brings a wealth of experience to the Trust, and he is much in demand to speak to local groups.

Emily Armatage, who lives at Kilduff, is Clerk of the Kirk Session, and she is taking over the role of Trust Custodian from Charlie Blair and ensuring that the Flag Heritage Centre is open during the season. Kenneth Stewart, from Edinburgh, and formerly an office bearer of the St Andrew Society, takes over as Trust Treasurer from Malcolm Duncan.

Chairman David Williamson said “The Trust is very much looking forward to a successful year in 2014 and to an increase in visitor numbers coming to this historic site in Athelstaneford. It is heartening to be able to welcome such enthusiastic and experienced people to the team”.

The Trustees also heard that the schools storytelling project is continuing. Professional storyteller Angie Townsend is arranging to take the tales of St Andrew and the Saltire in to King’s Meadow PS in Haddington, and to King’s Park PS in Dalkeith during the coming months. This will give youngsters an insight into the traditional origins of Scotland’s flag in which a cross appeared in the sky above a 9th century battle fought near the village, inspiring the Scots/Picts to victory.

Visitors to the Flag Heritage Centre, which lies to the rear of Athelstaneford Church, can enjoy an audio-visual dramatisation of the battle, available in 7 languages. Admission is free. The Centre, which is a 4 star visitor attraction, is open daily 9.00am until 6.00pm from April to October, and on St Andrew’s Day.