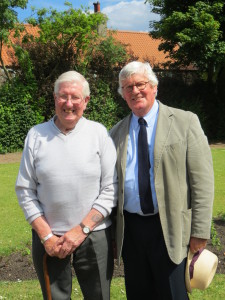 At the end of 2013, the Trustees said their goodbyes to Charlie Blair and Malcolm Duncan who were standing down after many years of dedicated service. Charlie has been the Flag Centre’s Custodian since it opened in 1997, and for 16 years had responsibility for opening and closing the Centre on a daily basis during the April to October visitor season. But he undertook a myriad of extra tasks, from grass cutting around the viewpoint, to hoisting the flags that fly permanently at the site. Malcolm has been the Trust’s Treasurer since 2001, and he not only brought a professional rigour to the task, but helped steer the Trust through some challenging times. He was particularly assiduous in reclaiming gift aid each year, and it was his initiative to install a donations box in the Centre that raised some thousands of pounds for the work of the Trust.

The Trustees are delighted to announce that Emily and David Armatage have agreed to take on the custodial duties in 2014, and that Kenneth Stewart has agreed to become Trust Treasurer.

It is also noted with sadness the recent passing in November 2013 of Trustee Robert McAlpine, former President of the St Andrew Society, who served the Flag Trust well over many years.

Photo: Charlie and Malcolm presented with retiral gifts at Trustees meeting in Athelstaneford Kirk in October 2013.