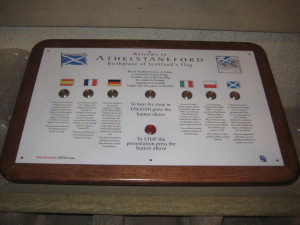 In 2009, to great acclaim, the Trust installed a multi-lingual facility in the Flag Heritage Centre to allow overseas visitors to enjoy, at the touch of a button and in a choice of 7 languages, the audio-visual dramatisation of the traditional origins of the Saltire at Athelstaneford. In addition to English, translations in French, German, Spanish, Italian, Polish and Gaelic were provided.

However, during 2012, the Trust was alerted for the first time by one or two visitors that the translations in German and French were less than perfect. It was pointed out that this was because of grammatical errors and passages that were unclear.

Accordingly, during the winter period, the Trust commissioned replacement translations in both languages to address the problem. Although not without challenges, the scripts were checked and redrafted, and new actors found to deliver the translations. All of this was successfully completed in time for the start of the 2013 tourist season on 1 April, and hopefully visitors in future from these countries will be pleased with the improvements.

The Trust would like to express its special thanks to local translator Ute Penny and the Rev Joanne Evans-Boiten for giving of their time and expertise in achieving this result, as well as to Sheena Irving for her professional help and guidance.